umm i could download it but i cant run it, it said

fork/exec C:\Users\user\AppData\Roaming\itch\apps\isleward\Isleward.exe: This version of %1 is not compatible with the version of Windows you're running. Check your computer's system information to see whether you need a x86 (32-bit) or x64 (64-bit) version of the program, and then contact the software publisher.

Sending us a report is the best way to make sure this gets fixed!

This is SUCH a cool game! big fan of the art style, and what a unique concept! Definitely going to be checking this out more in the future, but very impressed by what I have seen so far! I was unsure about the combat before I tried it, but I really enjoyed it. Very cool :)

Is there a way to put it in fullscreen? It'd help a bit, as some stuff on the website is in the way

You can download the client or play on https://play.isleward.com which will solve you issue.

I've deleted a comment chain in which multiple people express their obvious affront that I've decided to label Isleward as a Roguelike and ARPG.

I stand by my claims and I am very willing to discuss and defend them. That said, I will not allow this comment section to become filled with people who can not resolve disagreements amicably.

If anyone would still like to discuss this matter further, hit me up on Discord or Twitter please.

EDIT: It seems it's not clear enough at this point. This means, if you want to further complain about the genre classification, find another avenue to do it other than the itch.io page. Contact me on Discord where it's possible to have a cohesive discussion, for example.

Honestly I sincerely think you're losing both face and income by calling this game a roguelike.
Here's why:
From the outside looking in it would appear there are effectively two schools of thought regarding roguelikes, for simple need of terms lets call them "traditionalists" and "new wavers"

New wavers however will call anything with permadeath and procedural, resetting generation a roguelike. The trouble with pandering to what their market calls a roguelike is that due to the tile based nature of it your game doesnt have the marketability within such a crowd given their desire for swift, snappy action the likes of Spelunky, Isaac, Risk of Rain have. Then there's also the fact that they explicitly require procedural, and "resetting" generation of the world, an MMO the likes of which you've created looks like it would have procedural and "pesistent" generation of the world

This effectively creates a situation where by neither crowd is willing to call your game a roguelike, and both of which ask "why is this even here?". You are much like a cyberpunk cosplayer caught at a hypothetical goth convention whereby those into the victorian era gothic style are at odds with those into post modern goth culture.

Very good mmorg !
and I would like to make a game in multiplayer and therefore on which site you advise me to host my game?

Hey man. What kind of multiplayer game? Personally, I like Vultr but there are many options!

What game engine are you using? Great work

Everything is self-written except for a few plugins (like pixijs for rendering).

You can check out the source here: https://gitlab.com/Isleward/isleward

thanks for sharing! I’m working on my own basic web-based battle arena (Open-world PvP) inspired by Hordes.io ( but mine will be 2d haha ). Mine is hard-coded so far and is still very early but here it is: cnvas.glitch.me (just shows basic programming still working on UI, Skills etc.

i hope mine will work nearly as great as yours haha.

That's great, I wish you all the best of luck.

Feel free to join our discord server if you ever want to chat / ask questions.

Amazing game. only suggestion would be to put a full screen option so that whenever i move it doesn't scroll down on browser edition. other than that amazing graphics very very fun cool game.

Thanks for the kind words!

There is a full-screen option, it just doesn't work very well in itch.

Navigate to https://play.isleward.com in your browser, or download the windows client from itch for the best experience.

THIS GAME IS AWESOME!

is a good, i think is good open server discord, i can help u in pixelart ;)

Its an absolutely wonderful game and i enjoy the open source factor quite a bit! I hope you'll add more stuff to it at a later date.

Thank you! v0.4 should go live within a month or two!

Where are you from?

I have officially made a joke in the game. you consantly move left and right to simulate dancing, and the server i am in loves it

the starting screen wont come up and yes I have refreshed

Same for me. I'm about to try it on Firefox

I get the same issue Steely is having, only on Windows. Manual install via the website works fine.

im having the same problem foxpunk have.

fullscreen option isnt working for me, and every time i have to press space to attack it scrolls my entire screen down instead of focusing on the game still. im on the latest version of firefox

it turns red when I press W or S, 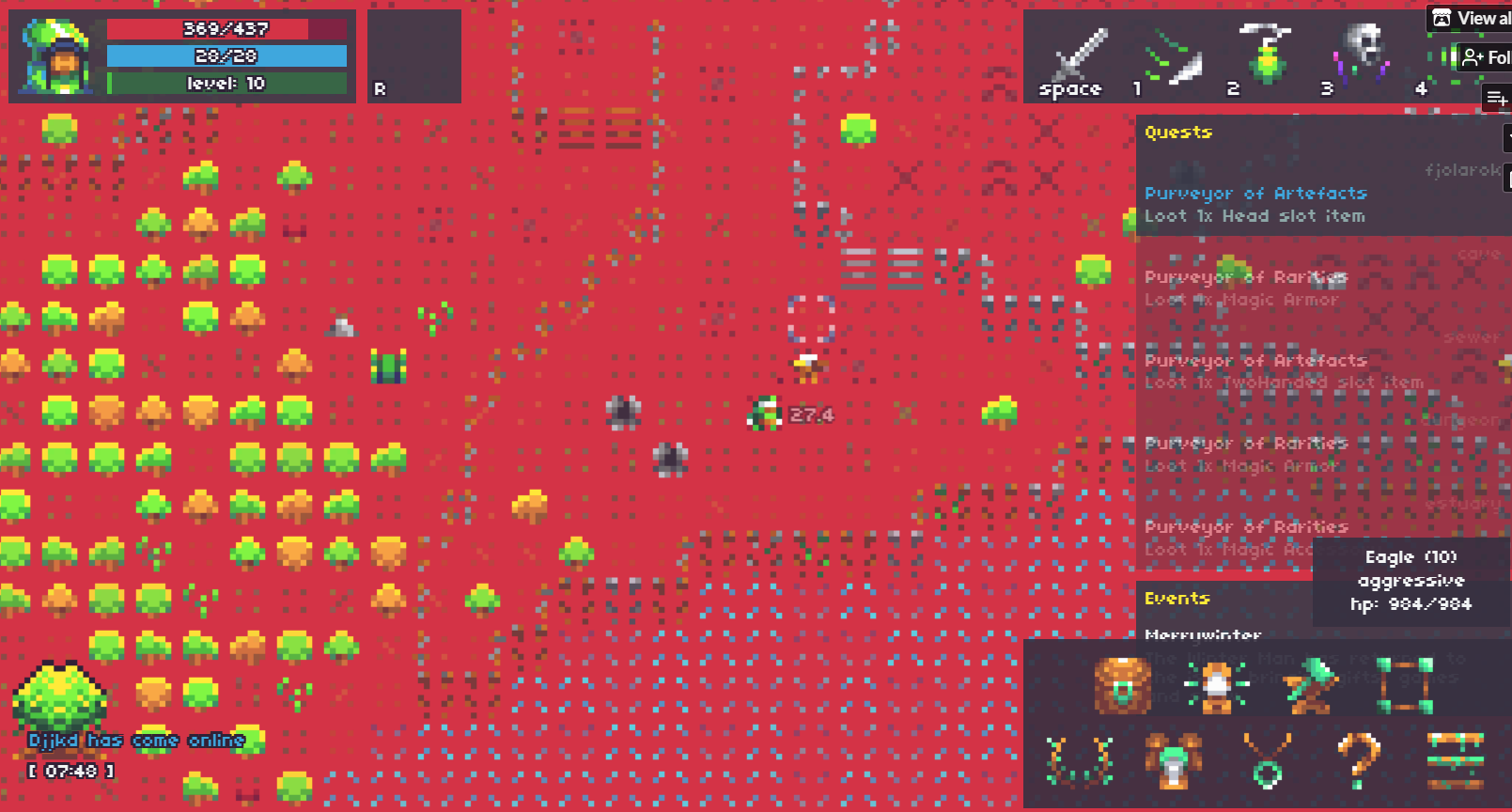 and turns blue when I press A or D, 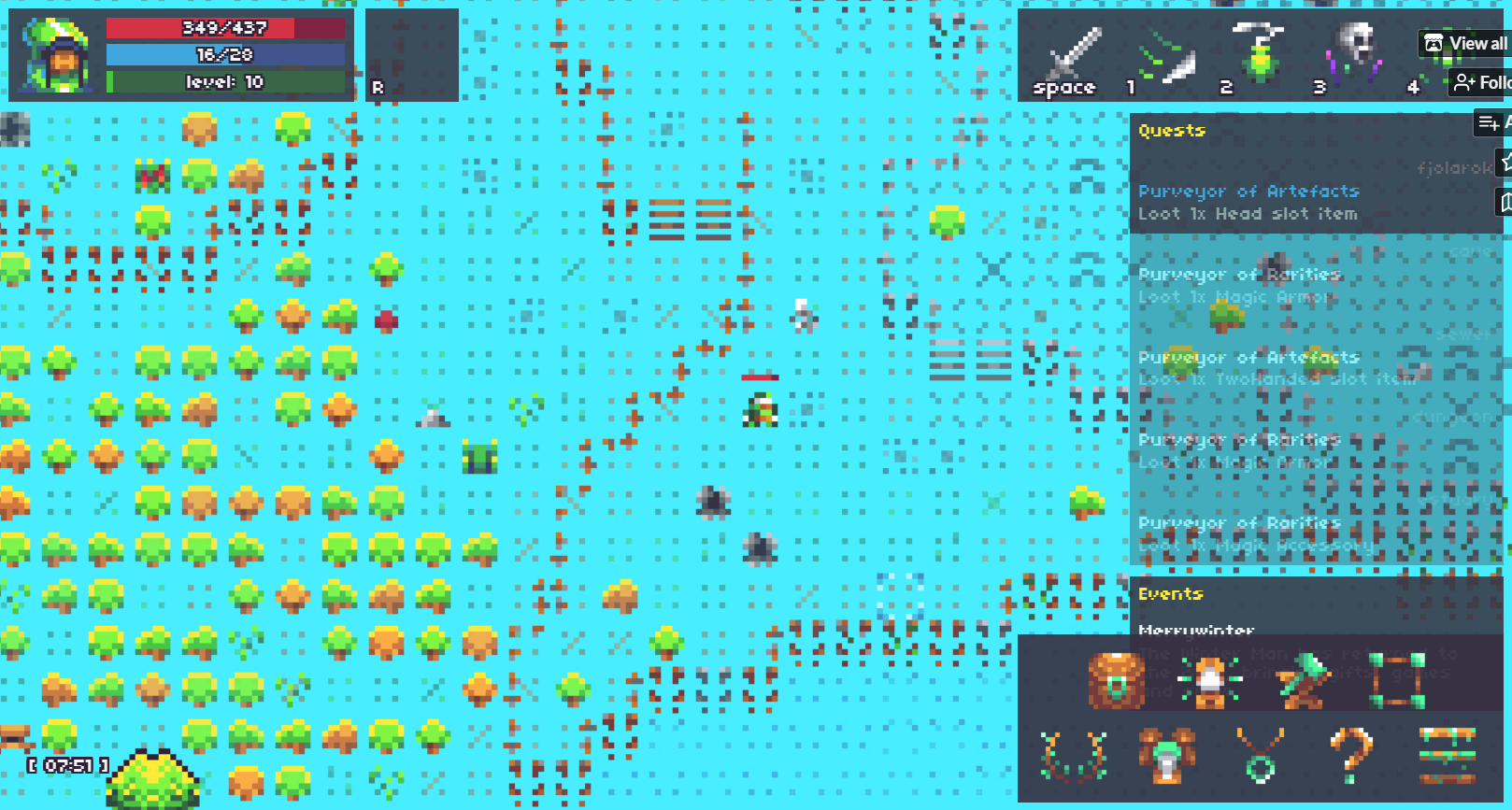 not sure what causes it, but I'm using chrome..

Hi there. For some reason, I always thought I had replied to this. So sorry about the nearly-year-long-delay!

fullscreen doesnt work, server is laggy from asia, it's a good game.

an audio would be nice

Press J. Or click on the paper doll icon in the bottom right.

clicking fullscreen option did nothing

Like the way this is getting. I wish I could help out :D

Thanks! Feel free to join the discord server; there are a fair few people helping out in different ways. Not all of them require coding experience and if you ARE a coder, the game is open source, so you can do that too!

Sorry about that. We built new binaries that still need to be uploaded. I'll do that within the next week.

Pardon me, but the way the downloads are structured breaks for itch v25 users. Itch has a tool for this exact situation called butler. Its documentation is here: https://itch.io/docs/butler/ If you could update the downloads to use it, app users could play this properly again! Thanks!

Thanks for the info! I'll have a look and fix it for you in the next week or two.

i just downloaded the game and im struggling to play could someone help me know the basics of where to go and how to get money?

Not sure if anyone answered your question already, but all the info is on the wiki: http://wiki.isleward.com/Main_Page

re money: kill critters - get loot - sell loot for money; you can sell stuff to the hermit on the south end of the island near where you start

Fyi, all the chat is over on Discord

Hi all. Sorry about the delay in updates. Real life was a bit crazy but gamedev is slowly picking up again. The next patch should hit soon-ish and will feature a very basic alchemy profession and a dozen or so bug fixes.

Awesome game i'm so addicted , but you should add more levels and mobs

should be volcanic like temple of lava. what i think is that this game needs a little touch of fire...

Yeah they should add that

beautiful game. nothing else to say. just asking do you have the name for the new dungeon? and when are you gonna open estrids shop? :)

Also I feel this game REALLY needs a map. And if you would give me your preferred sprite/pixel editor and the sprites for your terrain I could go around the map and copy it onto a map. Then again you could do this yourself although I would be happy to help lessen the work load.

Will you ever bring this to mobile. I feel that if you put this an the App Store you could make it free or for money (I would recommend $1-$2) it would be incredibly successful. With the auto fire feature it wouldn’t be too hard and if you used a D-pad you could also have a small button to hide it (allowing full screen access). Maybe after alchemy, ships and guilds are a thing it would be a thing to work on. This is just my opinion but it would allow me to fight my archdeamons, with my friends, on the go.

Reply
Something1603 years ago

Are you still developing the game?

Of course. Jump on discord for frequent updates. New version dropping in less that two weeks.

When is the next patch coming :P. Looking forward to the skill tree! Also think that the sprite for the ground and water could use a little rework! (The current sprite for dirt is like 4 dots of brown XD)

Some simple music would also be great! :)

It would be great if we can add players into a "friend list" and check if they're online <3 love ya!